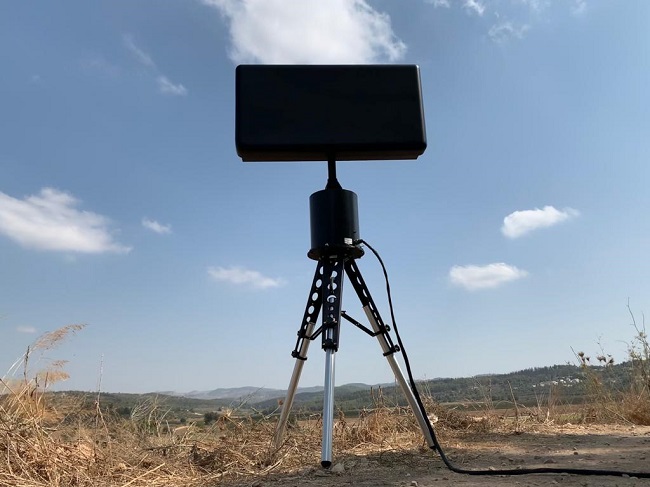 Drones might create a risk for human health and security. They are also often used to spy and get fragile information form protected areas, such as military bases and cause casualties by caring explosives.

Militaries often use this drone detection solution to catch drones. When the net hit a drone, it stops it and make it fall to the ground. Thanks to this, it is easy to prevent a drone from coming back to the sender and prevent fragile information from leaving a military station or worse, to cause physical damage due to explosives it carries along.
Pros: When drones get physically caught, the risk of getting back to the sender or causing casualties while exploding is quite slim. Additionally, using nets can help in finding and prosecuting the sender. An accuracy of ground-launched net cannons is high.
Cons: Drone deployed nets have a long reload time, so in case there is more than one drone, or if it was not caught in the first time, the threat still exists.

Radar uses radio energy to locate an object. Thanks to radars, it is possible to measure the direction and position of a drone. Most radars send a radio signal and ‘listen’ to the echo. However, they rarely pick small targets. Radars were designed to track bigger objects, such as passenger aircraft, etc. However, militaries use radars also to locate smaller drones that might be in the area.

Pros: Radars help to cover a big terrain. They give accurate location and can locate multiple targets at the same moment. As defense has to be as strict as can be at all

times regardless of the weather, radars are a very good solution even in case of In poor visibility conditions such as fog, night, etc.

Cons: Most radars cannot distinguish small drones from small flying animals such as bats or birds. Due to this, radars might be not efficient enough for military, as they can miss small size drones.

High Power Microwave devices can disrupt other electronic devices, such as drones. The HPM can interfere with radio links through which a drone is steered. Very often, the HPM destroys drones because of the HPM’s high voltage and currents. Thanks to that, for example dangerous situations can be avoided when a suspicious drone comes in the area nearby.

Pros: Effective to stop drones that are within the HPM range.

Cons: Even though this technology can protect military bases and high secured areas, it can risk other electronic devices and even destroy them accidently and unintentionally. Additionally, HPM can also disrupt communication signals.

Thanks to this technology, a signal is being sent to the suspicious detected drone and misleads it as to Its whereabouts. As the GPS coordinates are dynamically alerted, the spoofer, can control the drone. This way, the device can be removed from the area to a “safe zone” and the risk arising from the presence of the drone reduces.

Pros: The GPS spoofers are one of the most affordable technologies. As an effect, they can be purchased by armies in a higher quantity and be used in various places.

Cons: Unfortunately, the risk of jamming other radio communication signals.

The Phantom Dome 180 solution provides situational awareness of the SUAV flying over or approaching the secured zone (camp, compound, airport, etc.) and provides the option of mitigating a threat from a single or a swarm of SUAV.

The system can be installed at a fix location, as well as transported in an appropriate vehicle, this to provide operational flexibility.

– An active electronic radar system detects the presence of SUAV at a distance range of approximate 3km, and MUAV at a distance up to 20Km, depending on environment conditions and the flying altitude of the Drone. This gives accurate situational awareness and time to react to a threat.

– A passive RF sensor scans the area for electromagnetic signals that can be identified as Drones communication. When a threat is identified as Drone, the direction of arrival is clearly shown to the system operator to take actions. By installing a few RF sensors, the detection distance can be enlarged and by performing a triangulation, the position of Drone can be precisely determined.

3) Neutralization by soft-kill
Based on the threat analysis by the system operator, the UAV threat can be mitigated using electronic means by soft-kill, in means of frequency jamming.

The jamming is a concentrated RF power directed toward the channels of frequencies in use by the Drone for telemetric, control and navigation. The effective jamming distance depending online of sight and power output, can reach approximate 5Km or even longer distance with high power output (>50W).