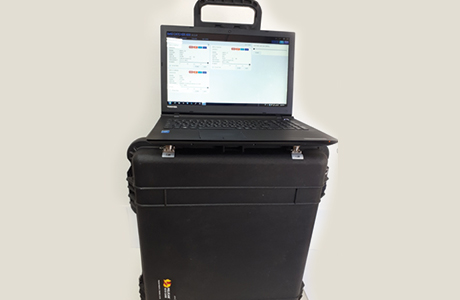 “Hello, operator? Are you really the operator?”

With almost all of our communication being transported invisibly over the air, it is easy to understand those who come to believe in the conspiracy theories that we are all being tracked and that all of our calls can be monitored. The fact is that whether it is happening or it isn’t, it is certainly a possibility, thanks to the increasingly advanced technology known as IMSI-catchers.

Whether in the hands of the ‘good guys’ or the ‘bad ones’, IMSI-catchers are usually deployed in discretion (there is no use advertising to the world that you are trying to “spy on their phone”) and without the knowledge or cooperation of the cellular operator. Therefore, significant advances have been made with respect to how they can be concealed and transported, and how they can be operated with little or no manual human intervention. Of course, usually the bigger they are, the more powerful the signal and the greater the range of detection. The more sophisticated models are able to monitor a wide range of active devices as well as target specific IMEI/IMSI numbers.

IMSI-catchers insert themselves into the mobile communication network by ‘fooling’ the mobile devices in the area that they are simply another BTS (base transceiver station) with a strong signal, so the devices communicate through them thinking that they are communicating directly with the cellular network. They are a key component in the arsenal of many law-enforcement agencies, constantly evolving in pace with advances in cellular communications and improvements in the security measures of the devices themselves. As the networks evolve, so do their security protocols. In order to be able to take up the role of  ‘man-in-the-middle’ and intercept the communication between the device and the network, it is necessary for the IMSI-catcher to ‘talk down’ the device to communicate over an older, less secure network. Beyond merely ‘catching’ the IMSI number, smarter units can send a ‘silent call’ to the device in order to identify the phone number associated with that device. As can be deduced from the name, silent calls cannot be detected by the user and they remain unaware that their communication can now be monitored or even manipulated.

Are you the good guys or the bad?

Since the anonymity and mobility of cell phones and cellular communications lend themselves well to criminal or even terrorist activities, law enforcement agencies use IMSI-catchers to track potential threats or criminals, to monitor illegal cell phone use (for example in prisons or in secured areas) and to aid their investigations. At the same time, these devices are sometimes used by those same shady characters to uncover confidential personal information or privileged corporate secrets.

So, while many conspiracy theories are the result of a mixture of over-imagination and a healthy dose of suspicion when it comes to the possibility that someone may be monitoring your cell phone conversations,  this is one theory that is not too far-fetched.